Government must U-turn on electrification

I today urged the Government to U-turn over scrapping the electrification of the Midland Mainline after figures have proved the huge environmental benefits.

During Transport Questions in the House of Commons, I drew attention to shocking figures showing that electrifying the Midland Mainline would deliver nearly 25 times the greenhouse gas savings than the Government’s preferred option of introducing bi-mode trains that run on diesel and electricity. 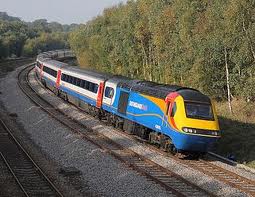 Following a series of parliamentary questions, the Government finally admitted last month in answer to my parliamentary question that their environmental impact assessment had showed that electrifying the Midland Mainline from London to Sheffield would deliver £271m of greenhouse gas savings over the next 60 years compared to £11m from introducing bi-mode trains. Today I asked if the Government are really serious in their commitment to the environment would they commit to think again.

In his response Transport Secretary Chris Grayling dodged the question. It’s shocking that the Government’s own study shows the massive environmental benefits of electrification -; and yet they scrapped it!

The Government claim they’re committed to Northern transport and tackling climate change, but here they’re failing on both counts.