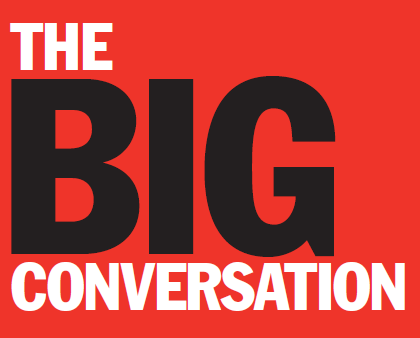 Since my election as a Member of Parliament in 2010, I’ve tried new ways of reaching out to make politics work for everyone I represent. My annual community consultation, the Big Conversation, is just one way of doing this, helping me hear the concerns of constituents to shape my work. For this year’s Big Conversation, I held forty events, including Q&As, themed discussions and café drop-in sessions right across the constituency. There were open meetings, as well as ones for different groups, such as young people, women, carer groups and small businesses. Some were on special issues, such as Brexit and community policing, and I visited schools, colleges, churches and mosques. In total over 1000 people came to events and over 900 people completed my survey. What I’ve heard will help set my priorities in Parliament.

My Big Conversation survey was sent to every household in the constituency, available online and distributed at every event. I was pleased that over 900 people completed the survey, and the top three issues that people said I should focus on in Parliament are, in order, the NHS, poverty/inequality and education – the same as last year. 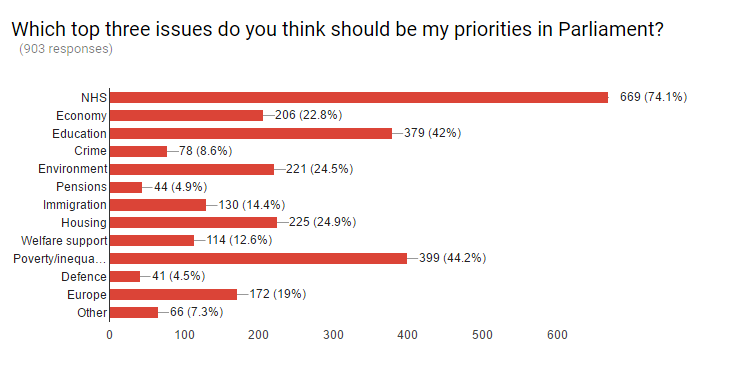 Since the state of the NHS was such a big issue for people last year, I thought it would be useful to find out which specific aspects of the NHS and social care are most concerning people. Two thirds of people said funding cuts, almost fifty per cent selected mental health services and just over a third picked care quality -; and that reflected the issues raised in meetings. I’m already following up on these concerns; I’ve challenged Jeremy Hunt on the £571 million shortfall for health and social care services and held meetings on mental health services in Sheffield.

Poverty and inequality were other big concerns last year and it’s the same again this year. I wanted to go into greater detail about what in particular were worrying people. More than half of people identified low pay, and I’ve been challenging the Government on the issue. Insecurity at work was the second aspect that most concerned people and is another area I’ve been pressing with the Government. Food poverty was the third most important issue when it came to poverty/inequality; I’ll press the issue in Parliament and I’ve launched a Christmas Appeal for the Sheffield Foodbank Network.

Across forty Big Conversation events, in every ward in Sheffield Central, many different issues were raised, but there were common themes that came up again and again. Here are some of the most prominent issues raised: 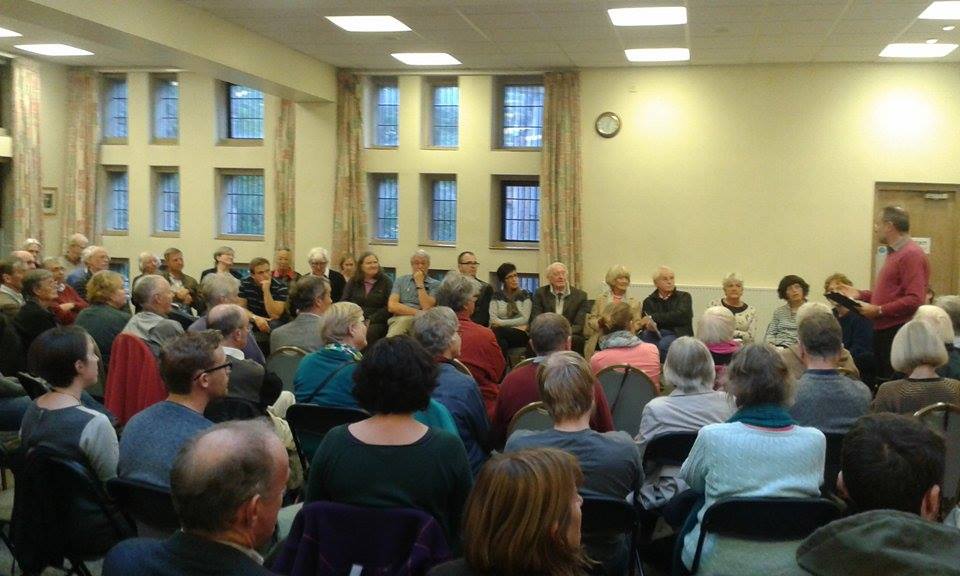 Education came up in a number of meetings, not just during my visits to schools and colleges, and there was particularly concern about the Government’s plans to lift the ban on new grammar schools. School students were strongly opposed to the Government’s move to end of course exams and wanted a greater emphasis on coursework. There were also concerns about Sex and Relationship Education, Special Educational Needs provision, and opposition to university tuition fees.

There were concerns about the impact of Government cuts to Council funding over the last six years, across all services, but particularly youth provision and adult social care. Rising antisocial behaviour was also highlighted in a few specific areas. I have already met with the new Chief Constable to discuss community policing and I’ve pressed the Government on whether council alcohol licensing powers are adequate to address some of the issues we face in the city centre. Concerns were also raised on both the shortage and cost of housing -; an issue that I have been involved in challenging the Government on previously.

The consequences of the EU referendum has dominated politics and the news since June, so it was no surprise that it was a major discussion point. There was widespread concern about the result and a number of questions about where the country should go from here. There was recognition of the importance of EU workers to our economy and uncertainty about how Brexit would affect businesses and university research -; as well as deep concern about the rise in hate crimes since the EU referendum, on which I have pressed the Government.

It was striking how often mental health was brought up in different meetings. People spoke about long waiting lists and there was a lot of concern especially about how young people with mental health conditions are waiting too long for counselling and other forms of talking therapies. Access to GP surgeries was an even bigger issue than in last year’s Big Conversation, and there were concerns on the NHS Sustainability and Transformation Plans.

As well as uncertainty about how Brexit will impact the economy, people had concerns more widely about job prospects after school and university. There were worries about unemployment and job insecurity. There were also questions about how Government can best help businesses create jobs for a future in which technology is changing. Several people said that there needed to be better advice about how to start a business. At the Women’s Event, concerns included work-life balance, the impact of maternity leave, the gender pay gap and employment tribunal fees.

There was anger about how the Tories have managed the welfare system, especially about the use of sanctions, cuts to benefits and Universal Credit delays. Some people talked about how this was fuelling the use of food banks. There was also concern about the level of homelessness in the city and a perception that there seemed to be more street beggars.

Young people were particularly concerned about rising bus prices. Lack of investment in Northern transport infrastructure was also discussed in several meetings, with people questioning whether the Government is serious about a so-called “Northern Powerhouse”.

Other topics that were raised in meetings included votes at 16, pensions, devolution, electoral reform and the Parliamentary Boundary review. 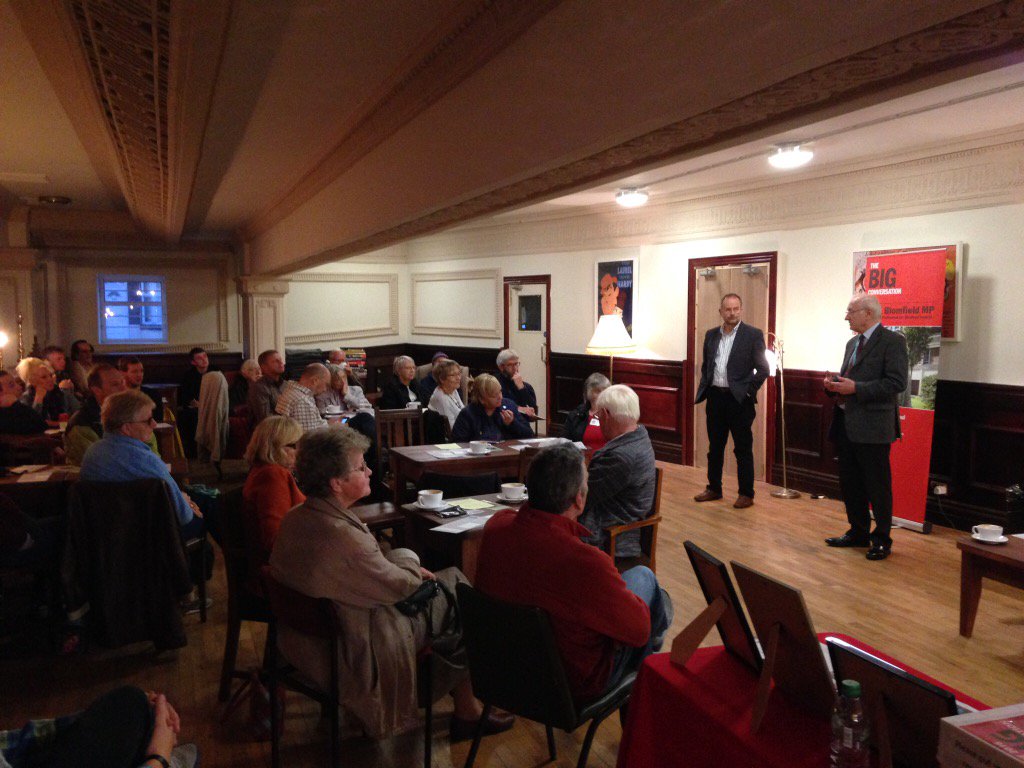 In meetings individuals also raised lots of specific local and personal problems, which I’ll be following up with my team.

In past years, I’ve used what I’ve heard at Big Conversation events to effect change. Last year, Sheffield Citizens Advice told me about a loophole in benefit rules which was causing some terminally ill people to wait up to two months to get benefits they were entitled to. I followed up on the issue in Parliament and got the law changed so that terminally ill people get their benefits immediately. This year’s Big Conversation has given me plenty of issues to campaign on in Parliament and I’ll be looking to bring about change. As you will have read, I’ve already acted on some of the concerns raised with me. Over the next year, I’ll be keeping you updated on how I’m acting on these concerns -; and as always, please keep in touch about these issues, or anything else.